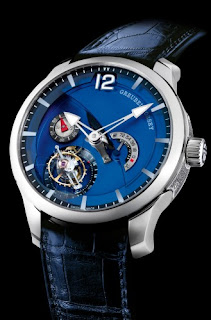 Greubel Forsey impeccable track record just keeps getting longer and longer with introductions of incredibly crafted timepieces.  The new Tourbillon 24 Secondes Contemporain is heralded with royal blue placing this timepiece on a pedestal.  As with all Greubel Forsey timepieces, and the result of its success, is the companies attention to the scientific aspect of research. Greubel Forsey takes nothing for granted in the process of watchmaking - from idea to final product - but rather every step it is approached with careful scientific scrutiny. 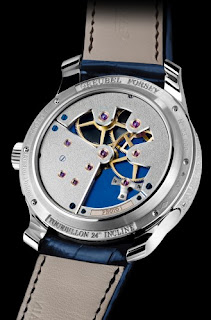 I think the watch has a rather whimsical -almost childlike quality to it strongly reminding me of an Alain Silberstein timepiece - Click here for more info on Alain Silberstein.  The case is crafted from platinum, a metal which is gaining in popularity since it has become cheaper than gold but still holds the same prominence, and the movement is titanium - highly resilient, corrosion resistant and strong.

As a result of a sapphire crystal bridge, the tourbillon 24 seconds,  seems to be floating beneath a dreamy blue sky like some strange and wonderful air craft on a voyage.  The blue is a result of a complicated oxidation process.  The speed at which the tourbillon rotates is a matter of high intrigue. Most tourbillons - click here for more info - rotate at one revolution per minute, but the Greubel Forsey 24 Secondes tourbillon rotates in 24 seconds set at an incline of 25° thereby further reducing the effect of gravity on the oscillator.
Posted by Vicky Van Halem at 11:46 PM