It's a New Moon for Konstantin Chaykin Lunokhod Watch 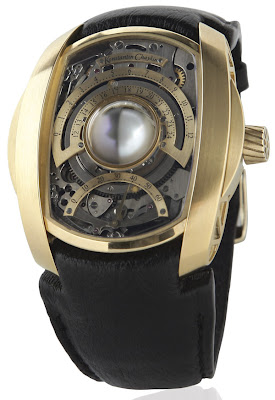 Russian Watchmaker Konstantin Chaykin was so inspired by the 1970 success of  Russian Scientists, who created and landed  two unmanned lunar rovers on the moon, he named a collection of watches after the vehicles: Lunokhod.

When I asked, "What so inspired Konstantin Chaykin to use the name Lunokhod?"

He replied, "The main theme that inspired me was the proudness about the russian scientists that make a moon rover."

Not only was it the success of this endeavor that prompted him to use the name Lunokhod, but also its uncanny play on words for a watch of this kind.

As Konstantin Chaykin explained,
"First I create the movement that rotate the 3d Moon in the watch. But its design was close to Moon rover form and I desired to call the watch Lunokhod. In Russian it looks like play of words - Lunok - Moon hod - movement. It seems to me like a good idea."

Embedded in the very center of  Russian Watchmaker Konstantin Chaykin's Lunokhod timepiece is the moon represented by a single pearl. The symbolism of moon as pearl is as old as time itself told around crackling fires in faraway lands.  An ancient Indian Myth claims pearls are dewdrops from heaven captured by shellfish at dawn in the phase of a  full moon. Looking up at the night sky a full moon softly bathing the world in its reflected light, one can imagine it as a large pearl The Lunokhod moon phases are indicated by a shutter, which slides across the pearl darkening its surface. 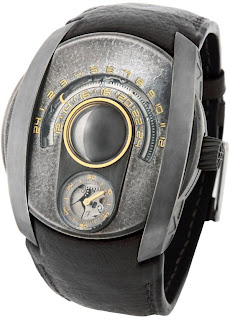 Surrounding the pearl are hour, minute and seconds retrograde time displays crafted in 18k yellow gold and curved like the indices on an ancient astrolobe.  One can almost imagine  Ptolomy donned in flowing robes peering at the timepiece and  generating complicated astronomical calculations.  The slim case is crafted from 18k yellow gold, which adds an ancient  elegance to its unique design.  The previous Lunokhod was a bit more sinister looking and had a more space age feel to it than the newer all gold model.  However the previous model used wootz steel, which is an ancient metal originating in India around 300 BC.  So coveted was this metal, it was given as a gift by King Porus ,ruler of an Ancient Civilization, to Alexander the Great.  Constantin Chaykin used this material as its texture simulated that of the moon. The moon in the previous model is not a pearl, but rather a textured silver.  A black rhodium plated silver hood which represents the moon phase change is probably used in both models. 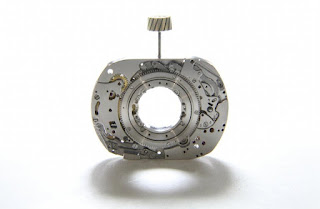 Konstantin Chaykin will release only 12 models of the Lunokhod in gold, priced at 110,000 Euros.
In a world where the art of mechanical watchmaking is increasing in leaps and bounds, Konstantin Chaykin has received quite a bit of notice.  His watches exude a strength of character and watchmaking skill only accomplished by the highly talented and exceptionally competent watchmaker.

The next Konstantin Chaykin timepiece to excite the watch world is his enigmatic, "Mystery Watch".  Mysterious because the dial hands are suspended in a transparent dial with out any conceivable support.  To be unveiled at BaselWorld 2012.
In time my Blog about  the Konstantin Chaykin Mystery Watch will reveal itself from its drafting board.