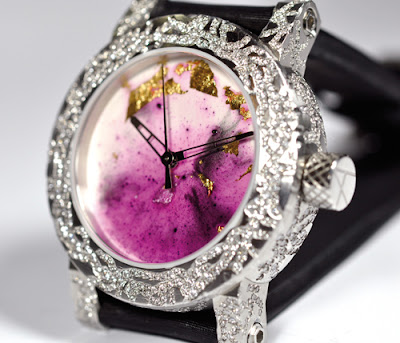 ArtyA's seemingly endless creativity has spilled over into a stunning woman's watch. The dial evokes the feeling of careless abandonment where beauty arises out of no where catching the onlookers by sudden surprise like a fiery sunset. The unique purple on the mother-of-pearl dial is from the spiky murex marine snail found only in  Essaouira, Morroco.  In ancient times the purple dye was so coveted that Cleopatra dyed the sails of her Royal barge purple. It is one of the most ancient dyes used as far back as 18th century BC as wall paint and pottery decorations. This color was associated with Ancient Roman Royalty.

Delicate gold leaves rest on the dial as though they had drifted on the wind and landed in a pool of water.  The art of beating gold into leaves was first mastered by the Egyptians in 1200 BC, thereby adding another ancient process to the dial of the watch. Surrounding a dial, which the Phoenicians would cherish, a steel case set with 735 diamond completes the look.