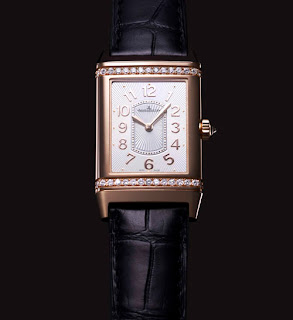 At this years SIHH, German Actress and Ambassador of Jaeger- LeCoultre, Diane Kruger, together with the company's CEO, unveiled the new feminine Jaeger-LeCoultre Ultra Thin Reverso. Diane Kruger was quite pleased to be unveiling a watch collection so close to her heart. On her 18th birthday, her mother had offered Diane Kruger, a Reverso of her very own.

In 1931, British Officers stationed in Colonial India would play polo in their spare time. More often then not the crystal of the wrist watches would get damaged during the game.
Cesar de Trey, an influential businessman, who was a close associate of Jacques-David LeCoultre visited friends in India.
A polo player approached him, "Sir, I challenge you to create a timepiece that can survive a game of polo with its crystal intact."

This challenge founded the legend of the Reverso. A Patent for Reverso was filed on March 4, 1931: A watch capable of sliding in its base and of turning completely on its axis to turn the crystal inward.

Over the past 80 years, the Reverso Collection has caught the attention of many watch wearers attracted by the watches elegant charm and aesthetic versatility both for men and women.