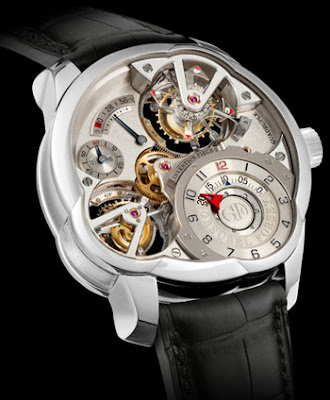 And the success of Greubel Forsey continues with the heart stopping Quadruple Tourbillon P2. This horological machine took center stage at this years SIHH 2011 commanding attention by its powerful presence.
The P2 has four asynchronous tourbillons, comprised of two double tourbillons systems presented head to tail and joined by a spherical differential. The time display is located at the 5'o'clock position. Hours are indicated by a red arrow originating from the Greubel Forsey signature logo. Minutes are marked by a rotating disc. Beneath this display is triple mainspring barrels which allows for a 56 hour power reserve in addition to sustaining the tourbillons. Seconds are discretely displayed at the 10 'o'clock and power reserve at the 11 'o'clock. The tourbillons hold the prominent position on the dials bulging out into the bezel as if the case alone cannot contain their memorizing rotations.
Tourbillons were originally invented in 1795 by Abraham-Louis Breguet to eradicate the effect gravity had on the functioning of the pocket watch. Greubel Forsey has decided to focus on Tourbillons - an extremely complicated function. In a Tourbillon the entire escapement assembly ,comprising of the balance wheel, the escape wheel, hairspring and pallet fork, rotates within a cage.
As Steven Forsey Said, " We chose to concentrate initially on tourbillons as we felt that as there had been relatively little experimentation and innovation in that field in relation to wristwatches, we had a good chance of discovering and contributing something new."
Greubel Forsey has achieved greatness in the horological world by pursuing the science of invention just as the great thinkers of the past centuries.
Click here to find out more about The Scientific Approach of Greubel Forsey.
As a result of the intricate craftsmanship required to create a masterpiece of this calibre, only 11 pieces in platinum and 11 pieces in red gold will be available,
,
Posted by Vicky Van Halem at 10:06 AM