What does Romain Jerome & Steampunk have in Common? 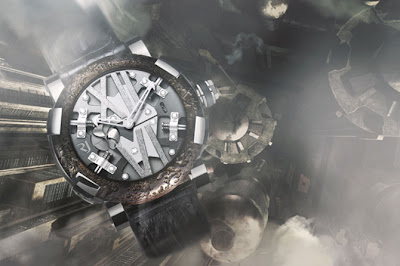 A watch of course? A Steampunk watch. "Perfect" I say, "Just perfect" Romain Jerome has surfaced from the deepest darkest ocean where the titanic rests in gloomy solitude; sank back to earth from its space voyages; leaped from lava spewing mountains and come to rest in the crevices of our imagination by adding its latest timepiece to its Titanic DNA collection. Steam Punk ,as you know, is an antique sort of science fiction, where strange gadgets churn in steamy hisses and rusted metals rear ugly heads between flickering gas lamps and swirling fog... and gears, lots and lots of grinding gears. So ,of course, it is not the first time a watchmaker has associated steam punk with watches. The genre almost demands it, being mechanical and all that, but one thing is certain, Romaine Jerome has indeed perfected the look.

The Romain Jerome Steam Punk watch is rugged to the core. Aggressive raw Roman Numerals spread across the dial as shard like hands indicate the time (ooh they have done such a good job with this watch). There is no dial to hide the inner mechanical workings and the four polished screwed down pistons secure the movement in a vice like grip. A whirl of a propeller marks the seconds like a tiny air vent in a steel facade.
The 50mm timepiece is an imposing raw piece of work meant to intimidate the opposition. Limited to just 2012 pieces, collectors will probably rush for this mechanical marvel crafted with incredible horological expertise and a whole lot of creativity.
Posted by Vicky Van Halem at 11:02 AM