Wyler Geneve Official Timekeeper of the Toughest Race on Earth 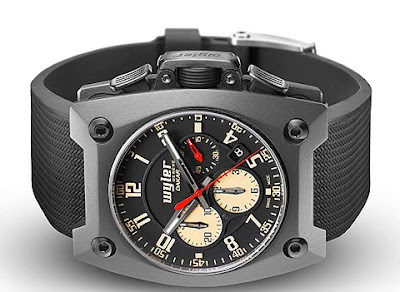 The Official Watch of the Dakar Rally is Wyler Geneve Dakar Rally limited edition, a watch capable of withstanding the toughest car race on earth. The 2011 Dakar Rally ran from January 1st to January 16th covering 5976 miles of rough terrain, sand dunes, steep jaw dropping inclines, sharp turns on steep mountain passes, mud, camel grass and harsh unforgiving environments of Argentina and Chile (from Buenos Aires to Valparaiso, Chile and the return via the Andes and through the Atacama Desert. There are no pits stops, no smooth race tracks. Too tough to be called a conventional rally, this race is known as a rally rade. 407 teams in cars, trucks and motorbikes revved engines and traversed harsh terrains. These cars are real off-road vehicles, not some souped up pretty car used in rallies. They are built to withstand the sudden jarring of a rocky outcrop or thick gooey mud.
Thus it stands to reason why a watch company such as Wyler Geneve should be the Official Timekeeper of the Dakar Rally. Wyler wristwatches are built with iconic shock absorbing capabilities to withstand the sudden jolting

and jarring endured by the Dakar Rally Drivers.

The Wyler Dakar Rally 2011 timepiece is marked with the color of Desert Sand. Wyler is known for its regular use of titanium -a highly resilient and lightweight metal. In fact the entire movement is encased in a titanium holder. But for Wyler that is not enough. The titanium is covered with ultra hardy carbon fiber resin. Titanium screws locks the entire board down to the middle ensuring maximised protection for the movement. Limited to 182

pieces to commemorate the 182 pioneers who were the first to tun the 1979 race from Paris, France to Dakar, Senegal. Due to security concerns and potential terrorism threats on the race, which even called teh unprecedented cancellation of the 2008 race. In 2009 the race was moved to South America.
The band is fashioned from non-slip rubber imprinted with the likeness of tire treads.

Wyler Geneve Watches glean watch making inspiration from the suspension system of cars, and judging from the rugged terrains endured by these vehicles, Wyler Watches have learned from the best. Wyler watches are built to achieve maximum time telling performance and to withstand the jarring of high impact sports.

Highly resiliant Wyler Geneve Watches NOW at THE WATCHERY at 70% off.
Posted by Vicky Van Halem at 9:47 AM