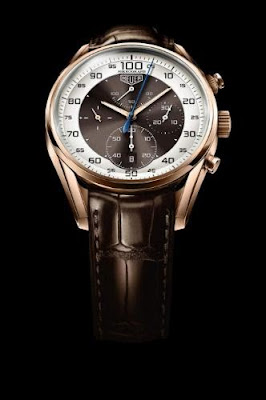 Tag Heuer has unveiled the first ever fully integrated, COSC certified mechanical chronograph baring a column wheel system, which indicates 1/100th of a second via a sweeping second hand. This milestone in mechanical horological craftsmanship is a "in house" Tag Heuer accomplishment.

With this design Tag Heuer pays tribute to its very first sports stopwatch - the Carrera Mikrograph. Unveiled in 1916, the Carrera Mikrograph turned competition ties into split second winnings by measuring in 1/50th and 1/100th of a second . Prior to this timekeeping milestone , stop watches could only measure time in 1/5th of a second. Tag Heuer has proved itself with its extreme timekeeping precision and through the years has became the official timekeeper of three Summer Olympic Games of the 1920s, the Skiing World Championships, Indy 500 Race, Formula 1 and many more.

The warm brown and cream hues of the dial surrounded by rich rose gold bezel, case and hands give an impression of complete external calm control with a subtle undercurrent of extreme efficiency. A vivid blue central 1/100th second chronograph hand commands the dial. Three counters are set in the rich brown hue of the dial; a chronograph minute counter at the 3 'o'clock; a chronograph seconds counter at the 6 'o'clock and the watches second hand display at the 9 'o'clock. Indicated at the 12 o;o'clock is the chronograph 90 minute power reserve.
A hand-sown, brown alligator strap and rose gold pin buckle completes the look.