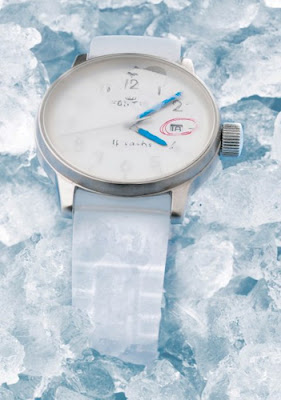 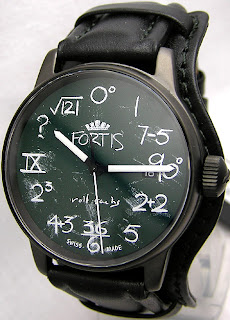 With a cold wind howling out my window, I sit down to blog about the coldest watch yet.  A watch whose name is Frisson or "shiver" in French.  The watch resembles some desperate attempt of a lone arctic explorer caught in a raging blizzard to track the time by penciling numbers on the dial and circling and re-circling the date aperture beneath an insistent layer of dial fog.
Granted, the moisture build up on a dial or glasses lenses or a car window on a rainy day is an annoyance. But Rolf Sachs, German architect and industrialist, taken advantage of this and has come up with a watch which uses earths natural properties to create the desired foggy effect.
You may recall Rolf Sachs stomach clenching, anxiety building mathematical equation Fortis IQ watch (right) with a perfect replication of the urgent chalkboard mathematical  markings most often seen at the end of an intense maths lecture.  For the Frisson watch, Rolf Sachs moves away from the mathematical department and heads over to the Department of Sciences, where he dabbles in the properties of relative humidity and the like.
The mineral glass crystal is treated with a substance which causes a constant foggy build up on the inside of the dial.  The only way to view the time is by breathing on the dial or wiping a wet finger over its surface.  The science behind this and the fact the fog within the watch does not turn into water droplets alludes me, but I can say it works.
This watch may be the target of many helpful mist removal tips, but once they perceive the icy theme of the entire timepiece, they may get the gist.  The strap is a transparent silicon resembling ice, of course.  The Frisson 25 jewel automatic Swiss movement is protected by a brushed stainless steel case. Beneath the frost, upon the dial, two pool-blue luminous coated hands are visible.  As with the Fortis IQ watch only 999 pieces are available.

Email ThisBlogThis!Share to TwitterShare to FacebookShare to Pinterest
Labels: Fortis