Pre- SIHH 2012 Jaeger LeCoultre Evokes an Era on a Dial 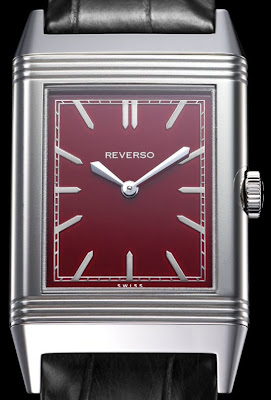 In 1931 Jaeger LeCoultre released a TT 1931 Reverso with a bright red enamel dial. (The color was very much that of a Coca Cola advertisement). Today this particular model is highly coveted due to its bright dial hue and fetches high prices at Auction Houses. At the SIHH 2012, Jaeger LeCoultre will unveil a reintroduction of the colored dial; however, this time the red color is done in red lacquer rather than the original enamel. . The Jaeger LeCoultre Grand Reverso 1931 Rouge Dial is simple allowing the color to command the watch unless of course one wishes to play a game of polo.
I mention polo, because the nature of the game and its potential harm on a watches' dial actually brought about the Reverso idea.
In 1931, British Officers stationed in Colonial India would play polo in their spare time; however, more often then not the crystal of the wrist watches would get damaged during the game.
Cesar de Trey, an influential businessman, who was a close associate of Jacques-David LeCoultre visited friends in India.
A polo player approached him, "Sir, I challenge you to create a timepiece that can survive a game of polo with its crystal intact."

This challenge founded the legend of the Reverso. A Patent for Reverso was filed on March 4, 1931: A watch capable of sliding in its base and of turning completely on its axis to turn the crystal inward.
Thus the SIHH 2012 Jaeger LeCoultre  Grand Reverso 1931 Rouge Dial pays tribute to the year the Reverso idea was born as well as the alluring colors of the watches dial.
Posted by Vicky Van Halem at 11:40 AM