Set your New Years Clock by The Midnight Ball Drop 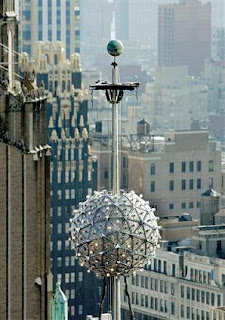 Ten seconds to midnight and one million faces stand shoulder to shoulder in Times Square their gaze riveted on a 11,875 pound Waterford crystal ball atop a flag pole hovering above One Times Square.  As the crowd counts down the ball descends the pole with precision timing.  It reaches the bottom at the precise moment the hour rings in 2012. Happy New Year!
So why is the New Year marked by a ball traveling down a stick? What is the significance?  Wouldn't something a bit more grand do? I mean Paris illuminates the Eiffel Tower in a complex array of fireworks.  In London the Big Ben sounds and in Australia multi-colored star bursts and gigantic sparklers light up Sydney Harbor. In New York a ball slides down a flag pole. Seems like a bit of an anti-climax doesn't it?  As for having fireworks in Times Square - keep dreaming.  Not that the idea was never thought of.  In fact fireworks marked the original Longacre Square celebration welcoming 1904.  One Times Square was of course the spanking new headquarters of The New York Times and newspaper chief ,Adolf Och, wanted to bring in 1904 with a bang. In 1904 the entire triangle became Times Square after the newspaper.  Fireworks were placed on the roof of the new building and 200,000 people attended the show.  After four years the fireworks simply did not draw a large enough crowd and Adolf Och asked his electrician to construct a lit ball which would slide down a flag pole.  The ball was crafted from iron and wood (compared with the l2,688 Waterford Crystal triangles of today's geodesic sphere) illuminated with a hundred 25-watt bulbs (now lit by 32,256 Philips Luxeon Rebel LED modules where each LED module contains 48 Philips Luxeon Rebel LEDs — 12 red, 12 blue, 12 green, and 12 white for a total of 8,064 of each color enabling a composite of more than 16 million colors and billions of patterns) and weighed in at 700 pounds (ours weighs in at 11,875 pounds) 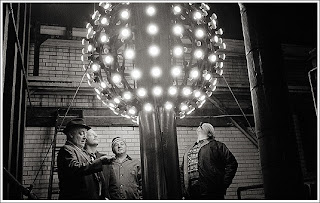 The ball (right inset) was lowered as the world sped towards 1908, but dropped one second after midnight... oops, but timekeeping has become a whole lot better.
But what significance is the ball drop?
In actual fact the ball dropping is a tradition fused to the very foundation in which man began to precisely track the time. The Chronometer, (not to be confused with today's chronometer which is a COSC certification ) was a vital instrument used by seamen to determine their longitude at sea by the precise tracking of time.

To know ones Longitude at sea, one must know the time at home port and at the same time knowing the time on ship. Once the time difference is known, the difference by degrees is known and thus the crucial longitude. The world spins on it axis 360 degrees in a 24 hour period thus in one hour it turns 15 degrees. If the navigator resets his ship's clock local at high noon, and refers to his clock representing time at the home port, every hour difference translates to 15 degrees from the home port. A precise watch was required to know the ships course and save it from potential destruction. On October 22, 1707, four British Men 'O War sank just off the Cornish Coast. 2000 men were lost. In 1714, The British Parliament , aggravated by this obviously needless catastrophe, passed the Longitude Act: A huge sum of money would be awarded to anyone who could invent a way to determine the precise longitude of a ship's location to within less than one degree.

By the 1800's, the chronometer was an essential sea vessel navigational instrument. To ensure the chronometer kept perfect time, a "time-ball", the first of many, was installed on top of England's Royal Observatory at Greenwich in 1833. The ball would drop at one o'clock every afternoon, enabling captains of nearby ships to precisely set their chronometers (a vital navigational instrument). The "time-ball" was an instant success and an additional 150 public "time-balls" were installed around the world. In fact, a "time-ball" is still dropped at United States Naval Observatory in Washington, DC, where, since 1845, a time-ball drops from a flagpole at noon each day.

Happy New Year to you all?
Posted by Vicky Van Halem at 11:42 AM