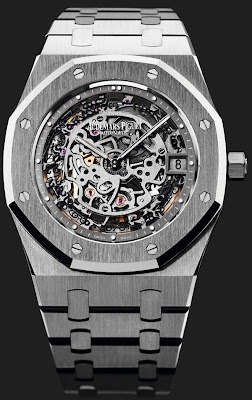 2102 marks the 40th year Anniversary of  the signature Audemars Piguet Royal Oak design. Many watch designs vanish after a couple of years  only to crop up in Antique shops and Estate Sales, but the Royal Oak designed by Gerald Genta, has remained a strong sale for Audemars Piguet attracting young and old alike. In commemoration of this milestone, Audemars Piguet will unveil the Audemars Piguet Open worked Extra-Thin Royal Oak Limited Edition 40th Anniversary.  The open worked dial exposes the remarkable versatility of the Royal Oak design in housing a movement as well as displaying supreme efficiency.
The timepiece evokes a response of utter respect created by its formidable presence.
The case is crafted from platinum - one of the rarest elements in the earth's crust - which neither tarnishes or wears out.  Due to its extreme rarity watch companies use platinum predominantly for limited edition watches such as the Audemars Piguet Royal Oak 40th Anniversary Watch.  Platinum therefore is often the metal of choice for high end watch companies to commemorate important events in their companies history.
The 39mm case is the same size as in 1972, but in this commemorative model, the  automatic mechanical Audemars Piguet skeletonized Caliber 5122 is on display too, and can be views via an open worked  dial face with a satiny anthracite finishing.  The oscillating weight is crafted in 22 carat gold with the inscription "AP Royal Oak 1972-2012”.  The open worked dial and case back is protected by scratch resistant glare proof sapphire crystal and is water resistant to 50 meters.

The timepiece is limited to 40 pieces.
Click here to learn more about the history of the Royal Oak
Posted by Vicky Van Halem at 12:50 PM