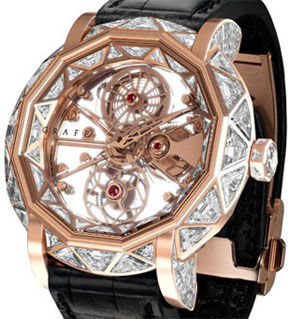 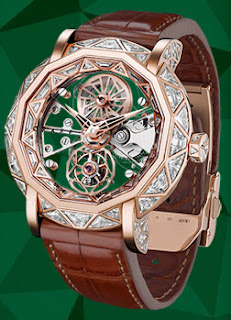 The MasterGraff Skeleton Watch is truly one of the most exquisite watches I have ever seen.  The bezel is shaped like the multi facets of a diamond playing with the rays of light and providing the illusion of iridescence from within. To achieve this look, 164 diamonds totaling over 21 carats were expertly place within a structure of rose gold. The entire structure must be in place  before the movement can be cased, after which no stone can be added and no stone removed.  Two scratch resistant sapphire crystals enclose the diamond case providing the illusion of a tourbillon  suspended in mid air like some beautiful space ship entering a lost glittering paradise. The hand wound mechanical movement is capable of a 72 hour power reserve, which only proves the remarkable efficiency of watchmaking skill, where 3 days of power reserve is discreetly stored in the barrel.
The 48mm multifaceted bezel and case is Graff's signature look - a look most fitting for a House of Diamonds.

Email ThisBlogThis!Share to TwitterShare to FacebookShare to Pinterest
Labels: Graff