A.R Luria on My Mind

To all my vanished friends, I have become submerged in Luria, a Russian neuropsychologist. I read him with feverish hunger and when reading is done, I think Luria, until part of my mind has succumbed to his works. This is all on a very intellectual level - no romantic notions involved. Luria explains the brain functions in a hierarchical manner, which develops as such the most primal functions developed prior to birth and up to one year. He divides the brain into Blocks. The first involving the sub cortical structures. He focuses on the RAS which controls the tone as well as the level of alertness of the brain. Although it is located in the Medulla, atop the brain stem, it has strong connections to the hippo campus and frontal lobe. It is responsible for alerting the brain to receive new stimuli, thus increases overall alertness. After a bang on the head, a sign of drowsiness or loss of consciousness can signal diffuse brain injury and since that area of the brain is responsible for respiration and heart beat, any pressure from the brain swelling onto that part of the brain can be fatal.
Luria describes a second block which receives, codes and stores sensory information. That 2nd block he further sub divides into primary, secondary and tertiary levels. These areas are for the most part on the lateral portions of the cortex. The primary visual cortex (occipital lobe), the primary auditory cortex (temporal lobe - Hershyls (wrong spelling) Gyrus , somatosensory cortex (parietal lobe). The olfactory cortex in our frontal lobe is quite underdeveloped compared to our relatives in the mammalian world. So we not the best smellers in the animal kingdom - and a good thing to; especially when they haven't picked up the garbage on a hot summers day in NYC. All the neurons in the primary sensory areas are modality specific meaning they only deal with the sensory input for that specific sense. Such as the primary visual cortex has neurons specifically for receiving visual information. Damage to that area will result in loss of vision. The secondary portions code the information and are critical for organizing information from that sense. As per Anne Treisman's Feature Integration Theory, stimuli in the very early stages of perception and of which we are not consciously aware is first perceived as parts such as colors and shapes and then put together as a whole (this is bottom up processing - explained in every Cognitive Psychology textbook) - an inability to do this resulting in damage to an area in the parietal lobe where a flurry of sensory integration activity occurs results in what is known as Balint's syndrome which is an inability to consolidate the different characteristics of objects.
Anyway my good vanished friends, I am not done. I still have to describe the tertiary level of Block two as well as the much popularized Block 3 encompassing the pre frontal cortex; however I am tired and without sleep my newly formed long term memories in my hippocamopus will not consolidate in my cortex and I will be left the worst for wear.
Sleep as Shakespeare so rightly puts it (and doesn't Shakespeare have a splendid way with words) ... Sleep Nature's Soft Nurse.
I will post when I have the urge and the information in my head leaks onto the keyboard.
Posted by Vicky Van Halem at 10:12 PM 1 comment: 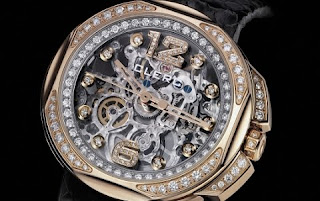 I hope to accomplish many things through this blog.

Please follow my blog and add comments.
Posted by Vicky Van Halem at 6:45 PM No comments:


Another heart stopping beauty is the Piaget Emperador Cushion Watch presenting an exceptionally accurate moon phase indicator, with only a one day difference in 122 years.

Piaget Emperador Tourbillon Skeleton Luxury Timepiece boasts the Worlds Thinnest Tourbillon. A mere 3.5mm thick, the tourbillon ensures that any slight time tracking discrepancy due to the force of gravity

is annihilated. Then again the lightness and transparency of the skeleton 600p mechanical skeleton tourbillon movement seems to defy gravity. Softened angles and streamlined case is elegantly aristocratic. By far one of Piaget's finest. The Piaget Emperador Timepiece is also available encrusted with diamonds making this particular timepiece the world's only gem-set skeleton tourbillon.

Piaget's timepieces are among the top watch brands mendaciously crafting watches since 1874. The tradition of watchmaking is bound to the very essence of Piaget, so much so that every timepiece is crafted with exceptional care and meticulous precision. In addition, Piaget keeps up with today's technological advancements. Piaget has launched a touch screen version of its website, so users of the iPad and iphone can easily navigate Piaget's website.

Posted by Vicky Van Halem at 3:04 PM No comments: