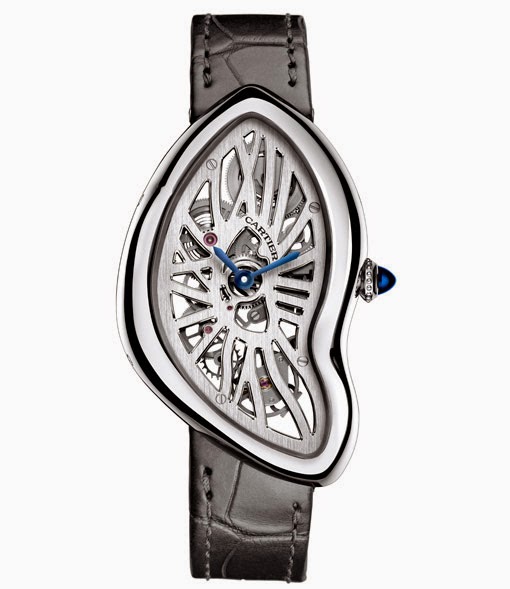 Cartier is ramping up its watch play by utilizing all its wonderful resources to crush competition and focus as much horological attention on a new Heritage Series featuring Cartier's Crash Collection as part of Cartier's Fine Watchmaking Series. In recognition of a great collection, Cartier utilizes platinum as a watchmaking material, which is often the case when paying exclusive tribute to an iconic design. In skeletonizing the design, Cartier adds a unique twist to the timepieces ensemble.
I remember the moment I first laid eyes on an image of a Cartier Crash watch with its indented side and what the dial shape can only be likened to a slightly twisted version of  Edvard Munch's "The Scream". For a fleeting instant, I thought the watch must be a person's play at photoshop until I did a bit more research and came up with some fascinating details.

Cartier describes the Crash Collection as "Created in 1967 in the heart of Swinging London, the Crash watch captures the incredible energy of the city at that time. With its asymmetrical dial, it revolutionized the esthetic codes of watchmaking history. Consistently released in a very limited series, this legendary piece carries the prestige of its rare nature." - Source Cartier Website

The inspiration for this watch, though,  is a bit mysterious.  It has been blogged and reblogged by all the big watch blogs, that this watch was inspired by the tragic 1967 accident of the Vice President of Cartier London and that as his car was engulfed in flames, his Baignoire Allongée melted upon his arm as he died. It does seem quite a dramatic story; however, I cannot  verify these facts. 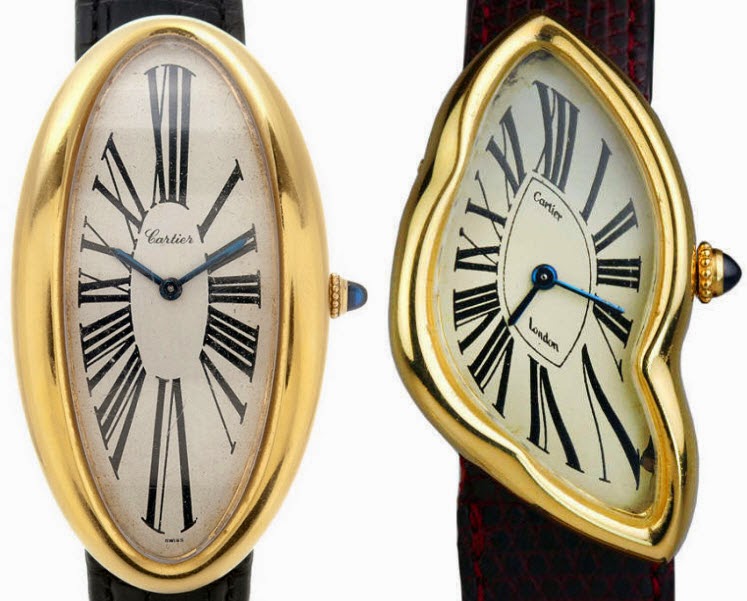 Although the above-depiction does look quite convincing, I still cannot find any proper source of the fiery car crash theory. Of course there is the view that this design was inspired by Salvador Dali's Soft Watch in particular his "Persistance of Memory , which also seems to have no grounds.  In any event Salvador Dali's depiction is that of Surrealism where as the Cartier Crash and what it implies is the epitome of Realism especially if the "Car Crash Theory" is true. My humble opinion anyway. 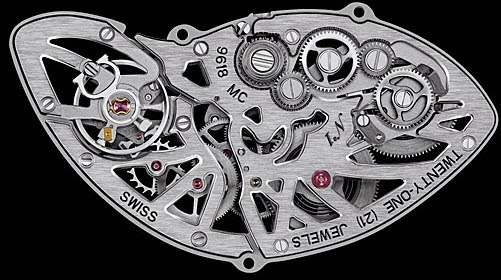 Of course if the dial shape is so twisted, the movement beneath must follow the same twisted form - and this is where my utmost admiration for Cartier's creativity come into play. With a purposeful lack of symmetry, Cartier has created a beautiful sculpture opposing the laws of nature where symmetry is coveted over lack thereof. The manual wound Caliber 9618 MC beating at 28,800 vph is equipped with a 3 day power reserve,  Just looking at the movement one can deduce that this is not a reworked movement.  This movement was constructed specifically for the Cartier Crash from jump street. The main plate and bridges take on a fascinating form with truly unusual arcs and carves accentuating the perfection and symmetry of the gear train and gear teeth.

The high sheen of the platinum bezel does well to compliment the matt look of the skeletonized dial. The case size is roughly 28mm x 45mm depending, of course where one decides to take the measurements. 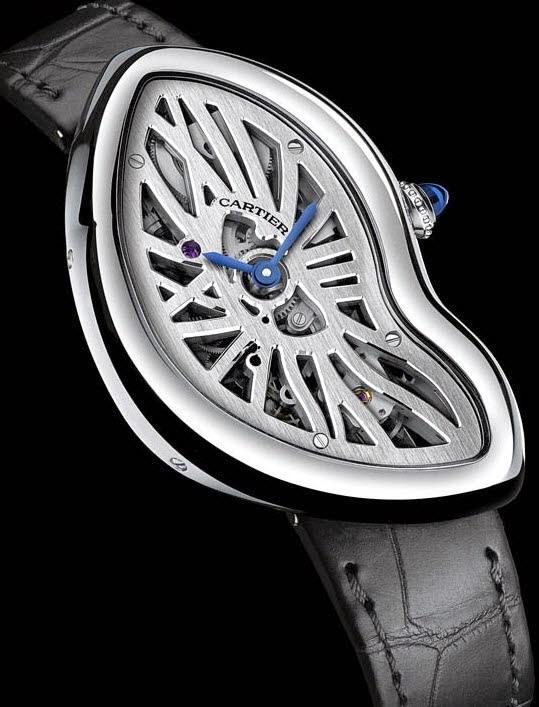 Cartier's signature blue sword-shape hands portray a heightened sense of balance within the bent dial form.  Roman Numerals are forged from the movement plate punctuated by 21 jewels.  Jewels are an essential addition to a watch movement utilized to reduce friction and increase the longevity of the bearings.  Another jewel - a blue cabochon - adds another traditional Cartier touch to the timepiece.

Now as the name Cartier Crash Skeleton does suggest a lack of control beyond the ability of a person,its careful component arrangement; the impeccable satin finishing; the chamfered and polished flanks of the Roman Numerals and the high sheen of the platinum suggests a control of impeccable performance achieved  by Fine Watchmaking at Cartier.  The retail price for this bent beauty is no less than 50,000 euros and a tad more for the editions exhibiting a diamond set-bezel.  Only 67 models of each edition will be produced - in recognition of the year the Cartier Crash came.