The Origination of the Foundation of a Timepiece - The Mainplate

I have been blogging about watches for years and I have read thousands of other articles and posts.  I have blogged about, the mainspring, escapement, balance wheel, gear train, crystal, watch case, strap, buckle, indicators, hands, crown, lugs e.t.c, but I rarely concentrated on the basic structure and foundation of the watch: The Main plate. Of course watchmakers pay close attention to this component,  as the perfection of the main plate is the first step in creating the perfect watch and often its design is the most discerning company trademark.

Even though, some watch companies like Swatch has sought to do away with a mainplate by affixing everything onto the case, and some have used a chassis like structure for watch components, the main plate is still the basis for most watches, mechanical and quartz.

What is the Mainplate of A Watch?
The Mainplate is the base or foundation of a movement to which various watch components are affixed.  Most often the mainplate is made from brass (an alloy of copper and zinc)  - a stable,  antimagnetic material that is malleable and can be worked cold. The mainplate begins as a smooth round disc, after which it is machined to accommodate components of the movement as well as the various movement bridges.Often the mainplate and bridges are signature to the manufacturer and with the keen eye of a watch expert, one can determine the origin of the manufacturer without additional clarification.   Precise crafting of the mainplate is essential to watch accuracy like the foundation of the house, whose very structure is based on the soundness of the foundation.  An imperfection of the mainplate results in an integral inaccuracy of all the other mechanisms of the watch no matter how perfect they are.   The main plate is often overlooked and underestimated since it is rather an inconspicuous part of the watch.

The Evolution of The Mainplate

Granted the mainspring is the oldest component of  a watch dating back to the 1600's, since it was the first successful way to conserve and emit energy and yet the mainspring needs to be mounted onto the main plate. Directly prior to the evolution of the mainplate,  timekeeping was kept by means of pendulum clocks.

The main plate seems to have almost erupted as being just obviously there with no more discussion on the matter.  I did ask a member of the esteemed Horological Society of New York- founded in 1866 -  and he suggested the circular main plate evolved out of necessity around the transition time from clocks to watches and from verge and foliot to stack-freed to fusee.  The 16th Century pocket watch incorporated with the stack-freed  utilized the empty space on the outside of the back plate in the pocket watch.   Thus still no indication of a mainplate.  However the more efficient fusee, used from the 15th century up until the 20th century,  does require  two plates to affix the mechanism.

A major break through in history of the main plate occurred in 1770. One of the greatest watchmakers of all times and Clockmaker to the King, French Jean-Antoine Lépine, designed a movement with a single plate. This construction was the first timepiece to transition from the hefty two plate movement, some of which reached great thicknesses of up to 38mm (now we are used to that kind of measurements in watch diameters not height or thickness)  to that of a single plate. He did away with the cumbersome fusee, a mainstay in timepieces since the mid 1500's, and  utilized the going barrel. In addition he individually pivoted the majority of the wheels in the train.    The revolutionary new Lépine calibre became the basis for all mechanical watch movements as we know them today. Thus we can say that Jean-Antoine Lépine is the father of the modern mechanical watch and  Breguet ,of course, fine tuned the mechanism. Countless movements have evolved from the Lépine calibre to such an extent that the origination of the main plate has dimmed through the passage of time.

I would love feedback on this discussion.

RJ ARRAW to the Core

Romaine Jerome of moon rock fame has shortened its brand name to RJ and introduced a new core line ARRAW. For a time Romaine Jerome was hyper focusing on the nostalgic crowd who grew up in the eighties playing Pacman in smoke filled arcades or alone at home playing Tetris on their clunky Commodore 64; however, as the new now generation of money makers want watches, they are looking for watches that fit into their framework of style.

The new RJ ARRAW Collection is targeting a wider range of watch wearers while still maintaining the intrinsic Romaine Jerome look.  Romaine Jerome port hole signature bezel and iconic bumpers are smooth and untainted with rust or moon dust, but still undeniably distinct.  As with all Romaine Jerome creations ,whether it be Pokeman, Batman, Super Mario Bros or intergalactic space themes, the watch elements are of impeccable design and quality.

The RJ ARRAW Chronograph collection is powered by an  RJ2040 self-winding movement.  The bezel is pronounced and chunkier than RJ's other collections and frames a smooth galvanized dial, gradient painted and  lacquered to enhance the perception of depth.  Skeletonized hour and minute hands are applied with SuperLuminova providing time-display in the dark. A 30 minute counter at the 9 o' clock, 12 hour counter as well as a date window at the 6 o' clock and small seconds hand at the 3 o'clock make up the three and a bit sub dials. A Sapphire crystal covers the dial providing optimal scratch resistance and readability.  The dial is available in 45mm for men's watches and 42mm for the ladies, which is smaller than most of RJ's other collections.   This reduction in size is another move to target a larger customer base with preferences of slightly smaller sized dials. 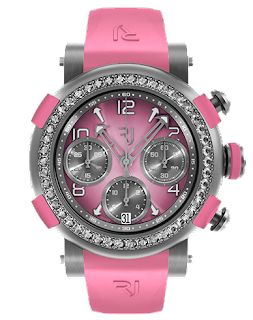 The RJ Arraw Collection also caters to the ladies.  The only other ladies watches from the RJ brand are those emblazoned with Hello Kitty - so in the event there are ladies who want to wear an RJ watch without a Hello Kitty can now wear an ARRAW.  The ladies collection is quite extensive with numerous color and material options such as titanium, gold, ceramic with interchangeable rubber straps and matching steampunk piston pushers.

There is a fine line between being buried into watch brand oblivion by trying to fit into the current popular trend - the downfall of many a watch brand - and being exclusively edgy enough to fit into the norm while maintaining a brand independence.  RJ has accomplished the latter feat remarkably and created an attractive collection of timepieces which I am sure will be on the wish list of many.

In conjunction with the new RJ brand unveiled at Baselworld 2018, the company has established its very own manufacturing company, RJ Forge.  To facilitate their manufacturing goals, RJ Watches SA will purchase Playing Moment SA (Nyon, Switzerland) - a company with pervasive watchmaking knowledge in component machining, finishing and assembly - not to mention a highly functional and fully equipped workshop with CNC machinery.  Playing Moment S.A. contributed a great deal in the creating the RJ ARRAW collection. In the future they will generate new product ideas contribute to RJ's research and development.

The new RJ brand name as well as the companies strategy change will increase sales and lend itself to a more mainstream watch brand  while still incorporating its spectral and  steampunk collections. This new venture will move the brand from the display cabinet to the conference room.


Posted by Vicky Van Halem at 4:03 PM No comments: