Entering the vast show halls may cause an overwhelming feeling of information overload.  To go to the show without a plan may cause one to fixate on one item or another and forgot completely what one came for.  Of course there always is the lovely element of surprise which can cause an unexpected and unpredictable turn of life changing events for a small vendor, a large buyer or a curious guest.

Thanks to modern technology, one has all the tools to come well prepared.  Baselworld provides a handy app which allows for optimal time efficiency - quite fitting for a show demonstrating the display of time. The app provides the hall and booth in which a particular brand is located; individual events and media info.  The app also provides daily news through out the show and any new Press Releases that become available. If one realizes time has been so well spent and have some hours to spare, the app provides Basel tourism and  transportation info.

In addition, the Baselworld website  provides detailed floor plans displaying which brands are where.

Hall 1.1 holds captive the watch and jewelry enthusiasts, buyers, boutique owners, journalists and seekers with a admirable range of watch wares.  Bejeweled brands such as Graff, Jacob & Co. and Boucheron, Professional sporty brands such as Clerc, Edox and U-boat, brands which hold their own such as Vulcain and Romaine Jerome, and iconic Japanese brands, Citizen and Seiko. In addition, numerous jewelry  brands dot Hall 1.1 like Mikimoto - prolific with pearls - and Faberge - its fame hatched from iconic eggs.

Moving on to Hall 1.2, one is greeted with a host of brands displaying fun fashion wear like Follie Follie, Toy Watch, Kappa, Anne Klein and  Go Girls Only.  In Hall 1.2,  Invicta - no introduction needed- displays its massive macho dials.  This hall has quite a sporty presence with professional diving watches by DOXA.    Casio sporting its latest G-Shock ,no doubt, unveiling another cool feature like last years GPW1000  GPS and atomic radio time syncing. 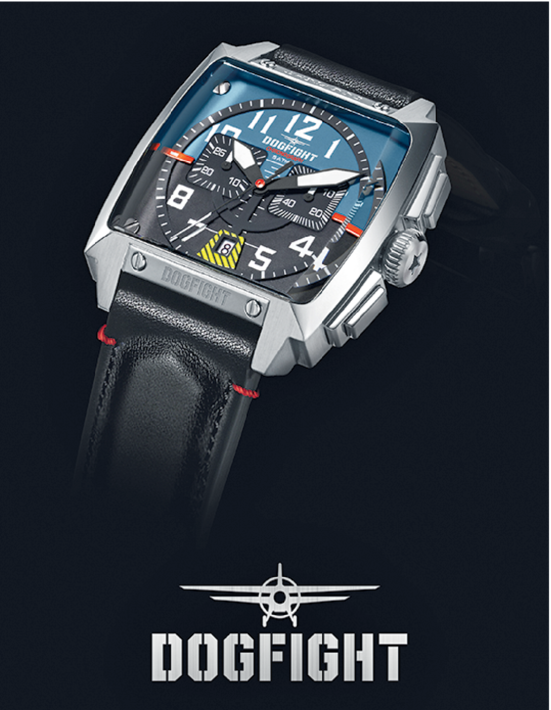 An entirely new watch company: DOGFIGHT makes its debut in Hall 1.2 unveiling pilot watches in tribute to Ace fighter pilots.  Ace fighter pilots are those who have five or more victories against enemy pilots in aerial combat. The term became popular in World War I. A DOGFIGHT in military terms  is an aerial conflict where two or more fighter pilots engage in aerial conflict with the enemy - the first DOGFIGHTS occurred in World War I.  The chronograph watches are the product of WIN, Inc, based in the Republic of Korea.

Hall 2.0; 2.1; 2.2 holds a vast amount of jewelry companies each booth divided by expertise and individuality.  Ball Watches and Eterna holds great representation in Hall 5.0 alongside luxury Italian jewelry corporation  - Damiani group. Personally, I think, aside for Hall 1.0; 1.1 and a quick gallop through 1.2, the Palace is the next step for a watch fanatic like me.  Here HYT proves that liquid can be held within the confines of a watch case - much to my original skepticism back in 2012.  HYT unveils the HYT H3 watch featuring a linear liquid indicator. The watch looks highly complex and a closer hands-on look will only increase ones horological amazement.  a timepiece displays its Skull Watch where one can look eye to skeletal eye orb in devilish red or true traditional HYT green. Set quite some time to celebrate with HYSEK,  the 10th anniversary of  ABYSS - its 44 mm flagship series Chronograph. 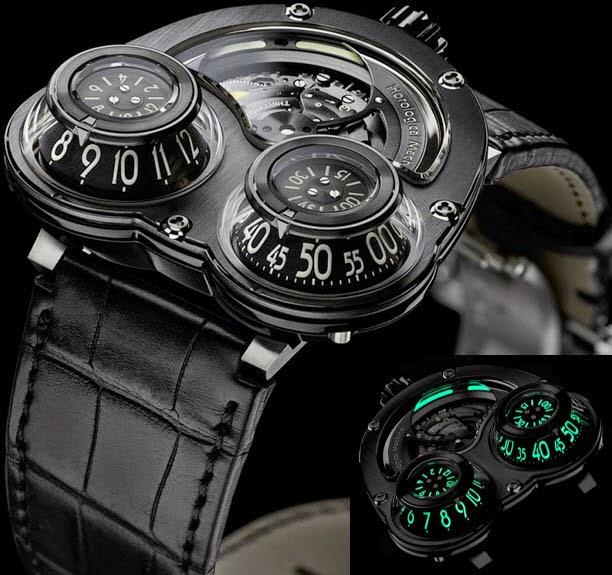 MB & F unveils its HM3 finale - The MB&F HM3 MegaWind Final Edition Watch featuring its two signature glass domes of hours and minutes, an impressive luminescence as well as the dial side rotor.    The rugged construction of the final model looks every bit "Holorgical Machine" from the black PVD treated 18k gold to the blackened 22k gold and titanium rotor.  Only 25 pieces will be produced and thus the opportunity to see the final HM3 "Light in Darkness" must not be missed.

Hall 3.0 and 3.1 hold an expansive assortment of diamonds and jewels and Hall 4U displays the most cutting edge tools of the trade. Hall 4.0 and 4.1 are the National Pavilions.

Baselword is not only about the halls and the treasures within its walls, but its a social event where common and uncommon minds meet and mingle.  Basel Village is a little village within the city of Baselworld where fine dining and excellent ambiance create a magical atmosphere after the intense show days.

Posted by Vicky Van Halem at 11:59 AM No comments: