Ebel has come out with a seriously trendy watch collection.  The Ebel  X-1.  The design has a clunky sporty side with a distinct underlying elegance. I really like this collection of watches as they fit right into the current stylistic arena while still maintaining an ebel fluidity and sensuality so distinct in its beluga lines.
The mid-range ladies watches run from $2,500 to $7,900 price range based on gold content and diamonds.

The model depicted above is my favorite based on its rare color and rose gold accentuations.  The hue is the result of brushed and polished PVD-finished stainless steel. The silver galvanic dial adds a mysterious edgy charm beneath a scratch resistant sapphire crystal.  Sapphire Crystal is a must for mid-to upper range watches.  Lower Range watches like Michael Kors will have mineral crystal - not as hard as Sapphire Crystal and more prone to scratches.

The women's  34mm brushed and polished stainless steel is a classy everyday watch with an elegant edge. At $2,500, this model is the most least expensive of the line; however still maintaining the exquisite representation of quality and worth.  As with the other models, the stainless steel model is water resistant to 100meters.   Click here for more info on water resistance.


At $7,900 this polished white ceramic and 18k rose gold case accentuated with a 15 diamond crown and a 48 diamond rose gold bezel is definitely the dressiest of the group.  The watch is a relished beauty suited for the most elegant of occasions and equipped for the week day wear. The movement, as all these models, are quartz.  A Quartz watch is powered by a battery and utilizes an electronic oscillator regulated by  quartz crystal.  As a result of the battery, a quartz watch requires no external energy source and thus requires little attention the actual mechanism of the timepiece.  About 90% of women's watches are quartz whereas about 60% of men's.  Obviously in the low range watches this percentage increases.  In the high range watches - where women's and men's watches run into the ten or hundred thousand mark, the percentage of quartz watches decrease; however more so for men's watches than women's watches. Whereas there is virtually no quartz watch in men's higher range watches, you still may find a couple women's watches, but as of late high-end watches for women are incorporating mechanical movements.

Mechanical movements require a constant outside source of energy provided by the swinging motion of ones arm triggering the movement of a rotor (mostly situated at the back of the watch - best material for this is tungsten), which winds the mainspring.  Watches powered this way are called automatic watches. The watch automatically winds by the swinging motion of ones arm. Manual mechanical watches require winding at the crown.    Increments of time are regulated by the precise motion of the balance wheel.
Mechanical watches require attention to the power reserve  of the timepiece, and can be somewhat of a hassle for a lady who has as many watches as shoes. If all her watches are mechanical and she does not utilize a watch winder, than more often than not her watches  have stopped calling for an exasperating excuse of lateness.
I suppose that is why many ladies watches are quartz.
As usual I went a bit off topic, but all in the name of horological education.

Email ThisBlogThis!Share to TwitterShare to FacebookShare to Pinterest
Labels: Ebel 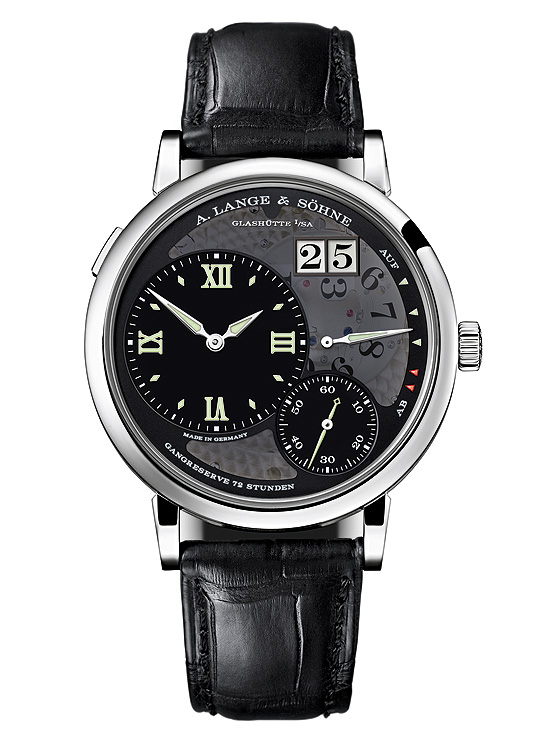 Every watch company wants to unveil a unique aspect to time telling, whether it be in a twist on a tourbillon; an avant garde alloy, a dashing design or an unparallelled precision in performance.  For the SIHH 2013 A. Lange & Sohne has focused on luminescence in an exceedingly interesting way.

One can immediately identify the large luminous date which takes up a prominent position towards the top of the dial. This is the first time A. Lange and Sohne has used luminescence on its signature large size date as well as its power reserve.   An intriguing aspect of the watch is the darkened partial transparency of the dial created from sapphire crystal covering the date disc like a darkened area of a stage waiting  for its scene, but there is a very valid reason for this.  Unlike the dial hands and Indicators, the future date does not see the light of day - critical for the effectiveness of  lume (For an in depth explanation Read What is Lume?), thus in order for the A. Lange and Sohne's large date aperture to glow in the dark as soon as the next calender date appears, it would have to receive a certain amount of light prior to its appearance in the date aperture - hence the transparent sapphire crystal covering the date disc. The idea of the tinted Sapphire Crystal dial is not entirely new, but a "date targeted" change to its A. Lange & Sohne Zeitwerk Luminous Timepiece.

has the uncomfortable  chemistry ,albeit eons of half-life's weaker, associated with another element: Radium.  Now Radium ,which is highly radioactive given its own founders, Marie Curie's, unfortunate demise and, of course the suffering of those poor young girls , has scared off a good many companies from even tentatively using tritium. One such company is Panerai. - But that story for another day.   Now I must mention the tritium used in watches today is encapsulated in tubes and as far as I've read have no ill-health effects.


Anyway I have strayed again - quite a bad thing which may send my readership plummeting into the very Stygian grotto I have aforementioned.

This watch is not for mass consumption, but rather an elite few limited to 100 pieces.  The case is crafted from platinum  - a metal often used for commemoration timepieces where the original timepiece was of steel craftsmanship, limited editions accentuating the prestige and/or watches destined to become a coveted collectors item. The manually wound movement is in-house (anything less would surely raise an eyebrow or two) A. Lange & Sohne caliber L095.2 comprised of  400 parts baring 42 jewels and capable of a 72 hour power reserve. The watch is strapped to the wrist by a hand stitched crocodile strap and secured with a platinum signature Lange prong buckle.

I must say this is a fine piece - very fine indeed.
Posted by Vicky Van Halem at 2:02 PM No comments:

Email ThisBlogThis!Share to TwitterShare to FacebookShare to Pinterest
Labels: A. Lange and Sohne

The Skull by Romain Jerome and John Armleder

Romain Jerome collaborates with highly regarded Geneva born contemporary artist, John M Armleder in a series of ten unique  Art-DNA watches. Each watch crafted from polished steel will be presented in a unique colors.  The signature John M. Armleder skull, which he has used in countless creative backdrops - such as emblazoned on a mirror - now serves as a imposing image atop Romain Jerome's  hammered polished dial.
Manuel Emch, CEO of Romain Jerome since 2009, has a great appreciation for contemporary art.

John M. Armleder received his inspiration for the creation of the skull motif from the Amerindian culture.

Manuel Emch, the CEO of RJ-Romain Jerome, is a devoted collector of modern art,  and explained, "I have wanted to link my passions for contemporary art and watchmaking for some time now, and apply this idea of art as a unique item or limited edition to a watch ...for me it was important to work with a Swiss artist because of the company's origins, and my admiration for John M Armleder's work and his role as a model for young artists meant that I didn't have to look for long." 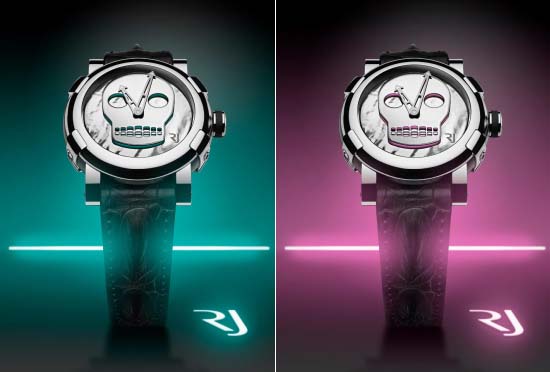 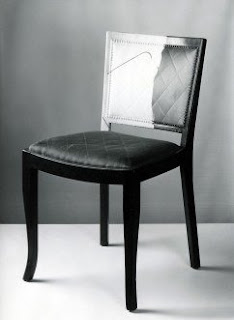 John M. Armleder is not simply an artist, rather an entire art philosophy.  Born in 1948, his skills cover a wide range of artistic representations such as performance artist, sculpture and painter. His philosophy focuses the fact that art in itself is a conduction of creative energy. He is renowned for his 1980's furniture sculptures , where furniture often in monochrome was juxtaposed with abstract art.  He is also associated with the Neo-Geo artistic movement of the 1980's.  A movement which is probably better described within the age of its occurrence - refer to The New York Times Article dated July 6th, 1987.

No doubt about it John Armleder is a constant example and role model of  avant garde creations and a wellspring of intriguingly unique perceptions of space. His creations are not isolated from the environment in which they exist, but command the space while embracing its unique geometry. 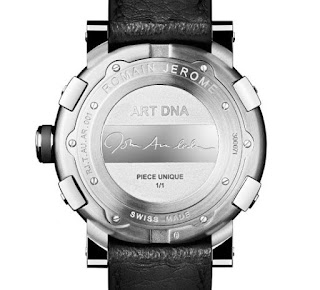 The case back is engraved with the signature of John Armleder and the Piece Unique. An alligator strap seals the deal with a price tag of $22,802 USD.

Posted by Vicky Van Halem at 4:42 PM No comments:

Make way! Roger Dubuis Excalibur 36 for women is tearing down the red carpet dressed in a dazzling display of haute horology.  She is dressed in her finest. A flurry of camera flashes illuminate a warm rich pallor of pink gold accentuated by two shimmering trains of 624 diamonds trailing along her polished bracelet. The diamonds of brilliant cut - amount to 3.79 carats.  A choker of diamonds upon the bezel surround a face of serene sensuality. Pink Gold Roman Numerals languish beneath slender hands of delicate grace.  A perfectly placed discrete seconds sub dial  mark time in increments of utmost precision.

All marvel at her beauty and grace as she steps upon the stage to receive her award. Of course this is not her first award.  The Roger Dubuis Excalibur holds the Hallmark of Geneva and we all know what a feat of accomplishment that is.  In fact Roger Dubuis, her maker, was the first brand to adhere to the new stringent requirements outlined by the Poinçon de Genève. Read about the Roger Dubuis Excalibur Flying Tourbillon Monopusher Chronograph it here.
She is a Chronometer too given to her by the Contrôle Officiel Suisse des Chronomètres or COSC.  It is no easy feat to attain this exemplar status. Read about it here.

Aside from her outside beauty, the Roger Dubuis Excalibur 36 has an inner beauty which is revealed in her  perfection of timekeeping.  Encased in a lovely exterior is an exceptional interior.  An exquisite cutting edge mechanical marvel , the automatic calibre RD821 makes her heart beat.  172 components function in mechanical harmony.

And if you wonder if she will tire on an evening such as this. Your Roger Dubuis Excalibur 36 has a power reserve of 48 hours. 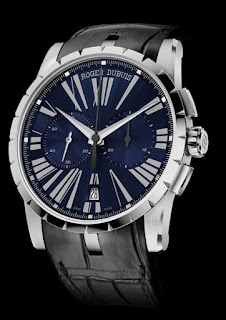 And who is the dashing young man by her side.  A man dressed in midnight blue, rugged steel case and a black leather strap.  A vision of daring masculine ruggedness not quite masking a distinct aura of dependability and reliability.  Meet the Excalibur 42 Chronograph. His heart beats to a slightly different drum, the 280 component RD681 automatic chronograph movement baring a micro-rotor.  A micro rotor is as efficient as a regular rotor which usually commands the entire case back.  The micro rotor only takes up the space comparable to a sub dial.
Some men are hard to read and keep their thoughts hidden beneath a layer of macho repose; however all is revealed with startling clarity on the face of  the in-house Roger Dubuis Excalibur 42 Chronograph.  The sword shaped watch hands point to the hour and minute with precise intensity.  Seconds are revealed at the 9 'o'clock position and a telling 30 minute chronograph dial is exposed at the 3 'o'clock position.  As for a date, ones eyes are drawn to a discrete aperture located at the 6 'o'clock position.
This Gentleman's timekeeper holds the Seal of Geneva and the affluent Chronometer title.

Both timepieces are of unsurpassed quality destined to create a dazzling SIHH 2013 entrance.

Posted by Vicky Van Halem at 3:19 PM No comments: